Catfishing One Person's Attempt to Swindle Me!

Catfish.  They're "junk fish" and "bottom feeders," so a lot of people won't eat them, but I LOVE catfish.  Give me some ketchup, a little Tabasco mixed in, a side of french fries, I'll eat catfish all day long.  But, "catfish" in the dating world is no good. 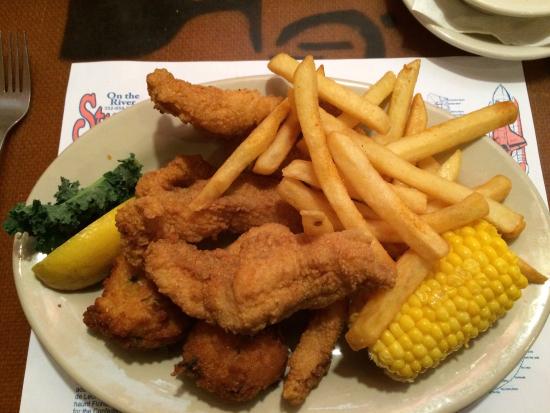 At lunch today I had a message that someone from OKCupid had "liked me."  I clicked on it--and there he was a man in uniform, and he was attractive.

I thought it was weird that he was so "Army", but I scrolled through his page.  He had posed with puppies, he had some tats, and he was "close by" and within my search parameters.

I guess OKCupid has some freaky thing that tells people when you're online, because he messaged me, and dang, he was laying on the charm.  I'm not that great at receiving compliments, so I resorted to my "Ah, that's nice.  Thank you, and have a great day." message and left the app. 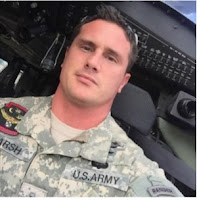 But he came back with an "I'm serious. You're pretty" line--or something like that.  I, a big fan of self-depreciating humor, wrote, "I bet its time to get your eyes checked..probably need a new prescription for glasses."

He just kept going, flattering comment upon comment, and I said, "I bet you're catfishing me."  His reply?  "WTF.  Catfishing?"

Okay, Sparky.  I see how you're gonna play this....so, I catfished the catfisher.   But, before I tell you how we ended things, here were my red flags. 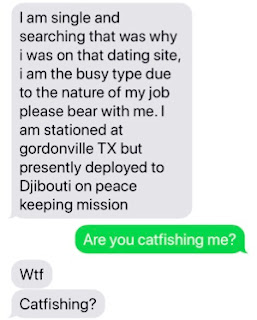 So, I thought, "let's turn up the heat on this dating pan and watch this "frog" get cooked." 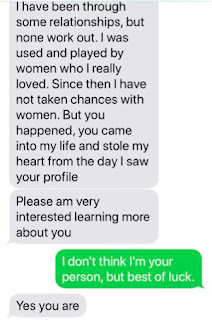 I asked him to send me a picture or call me right away!  My lunch friends were DYING!  Poor Tyrone didn't want to talk to me--"busy with Army stuff"--but he continued to profess his undying love, and it was too much.  My lunch table friends decided I needed to tell him outlandish stuff.  Mr. Army Ranger had a lot of "Tyrone" pics but wasn't interested in sending me any real-time photos.

Whatever he told me, I'd agree with him then change my mind;  I'd want the opposite or propose a new idea instead, and Tyrone would go along as he was "desperate to make me happy" because I was the love of his life.

I finally told 'Tyrone', "I wasn't interested in a long-distance relationship since my father is in the FBI (not true) and doesn't want me to date any more soldiers (never dated a soldier).

My reply BROKE Tyrone's heart.  He was retiring from the Army in three months, AND he would come back right now for "R&R" if I wanted him to return--we didn't get to the money part, but I'm SURE I would next be asked to get him an airline ticket.

WHO FALLS FOR THIS STUFF?  I'll tell you who.  A lot of people--men and women alike.    The victims are lonely, they want to be loved, and they are willing to listen to a Casanova string together musical sentences with all the right buzz words.

Ladies, know your self worth.  Don't be fooled by an attractive guy who has puppies or a uniform.  Protect your online identity, your heart ,and your self worth AND pocketbook.

Suggestions for safety:
Stay safe!  Until next time. Happy fishing!


Posted by Figuring Out Online Dating One Swipe at a Time at 10:36 PM

Thanks for commenting! We look forward to reading!

Figuring Out Online Dating One Swipe at a Time
I'm just a girl in her 40s looking for a happily ever after. I never wanted to be in this "online dating scene," but here I am. I'm a hopeless romantic who wants a flash mob proposal one day and a man who will watch sunsets on our back porch surrounded by shelter dogs howling at the moon.